This healthy pumpkin crisp gives you all the flavor of pumpkin pie with a delicious oatmeal crisp topping. It’s  sweetened with pure maple syrup and made with plenty of pumpkin and whole grain oats. It’s a delicious and easy gluten free dessert everyone can enjoy! 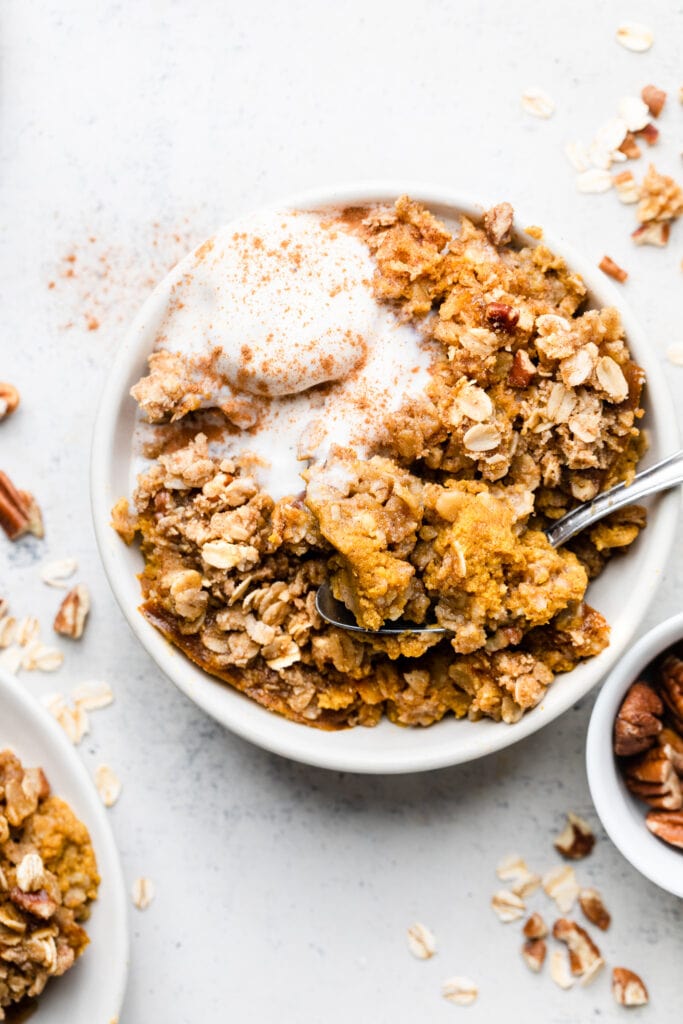 Pumpkin pie is delicious, I’m sure most of us can agree, but this pumpkin oatmeal crisp might be even better, to me!

It has the classic, warmed spiced filling that we all know and love in pumpkin pie but it’s topped with a perfectly sweetened crisp topping. The topping helps to add a bit of texture and crust and, when topped with a scoop of ice cream, the result is PERFECTION.

Watch How to Make This Recipe

This oatmeal pumpkin crisp is made with just a few simple ingredients that you likely already have on hand. The best part? a pumpkin crisp takes much less time to bake than a traditional pumpkin pie that can take an hour or longer.

This crisp takes around thirty minutes to make and is pretty easy to throw together which makes it a great holiday dessert option. It’s also gluten free and can easily be made dairy free if needed! 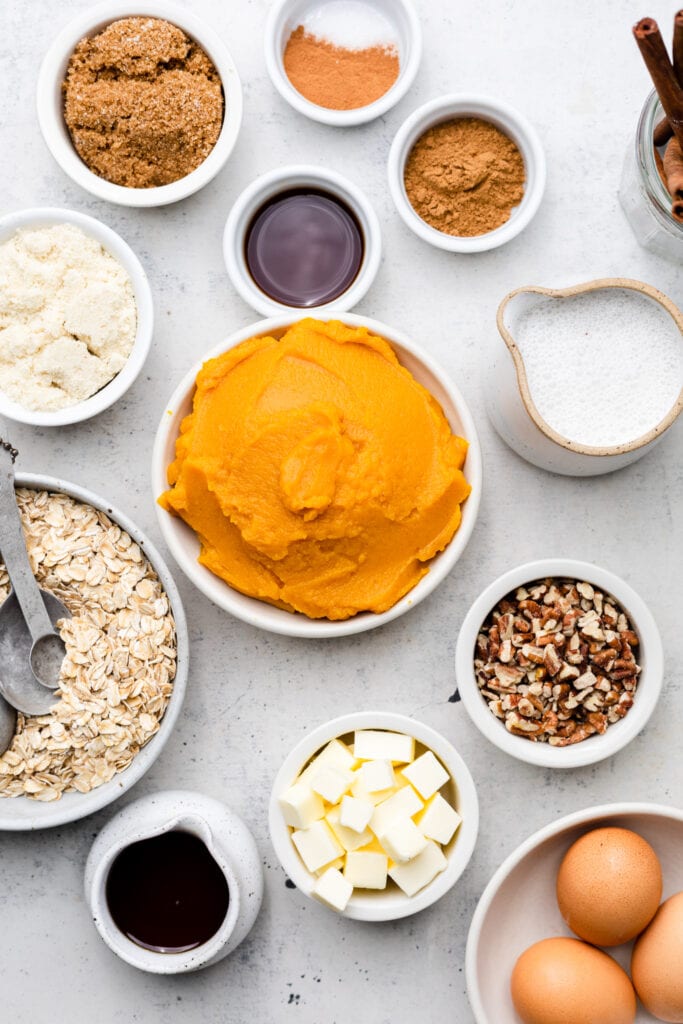 Maple Syrup: the flavor of maple syrup and pumpkin is a match made in heaven which is why I love using it to sweeten the pumpkin crisp filling.

Vanilla Extract: be sure you’re using the real deal stuff if you can. The flavor is unmatched.

Eggs: a few eggs help to stabilize the custard like filling and keep it from running all over the place.

Almond Milk: I like to use plain almond milk but you can use vanilla if you prefer.

Spices: a combination of pumpkin pie spice and a little cinnamon help to give the filling some delicious flavor.

Oats: the base of the crisp topping is old-fashioned oats. Oats are naturally gluten-free but if you have a gluten intolerance or allergy, be sure to grab certified gluten free oats.

Almond Flour: to keep the crisp gluten free, I I like to use finely grain almond flour in the oatmeal topping.

Brown Sugar: this is used to sweeten the crisp topping.

Pecans: these add a little extra crunch and texture to the crisp topping.

Butter: when baking, I like to use a high quality unsalted butter. We’ll add a bit of salt to the filling and topping to offset the sweetness of the recipe. 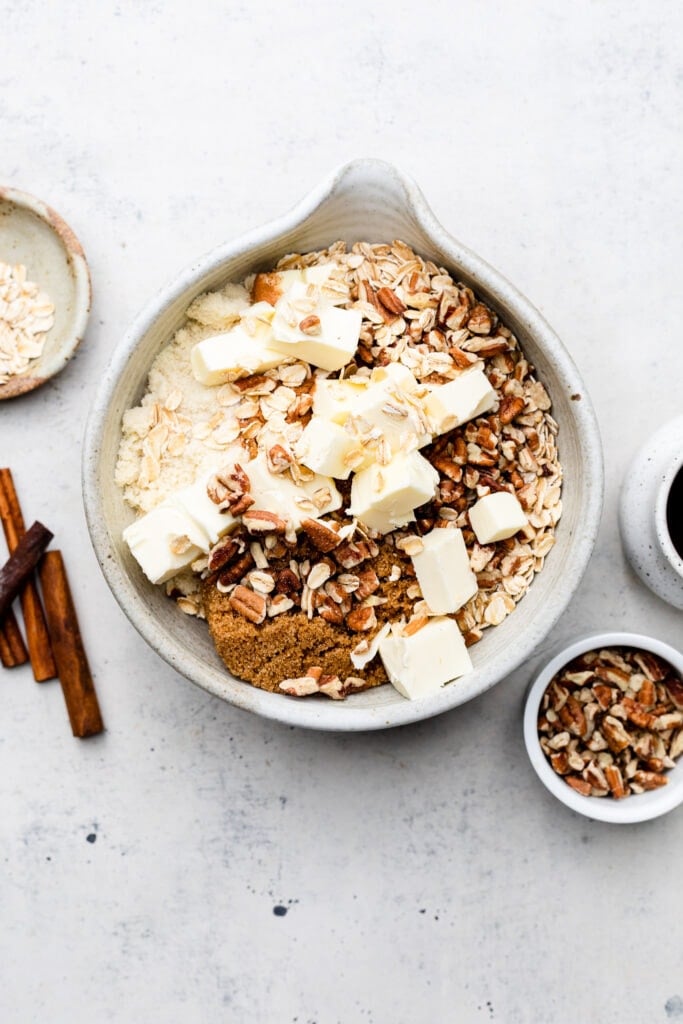 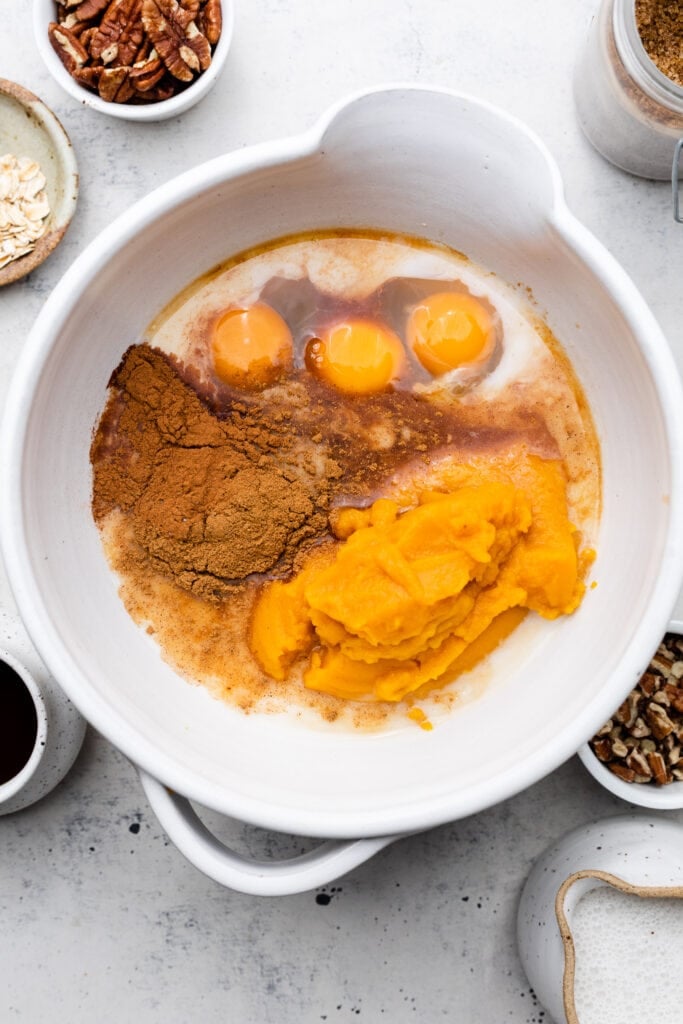 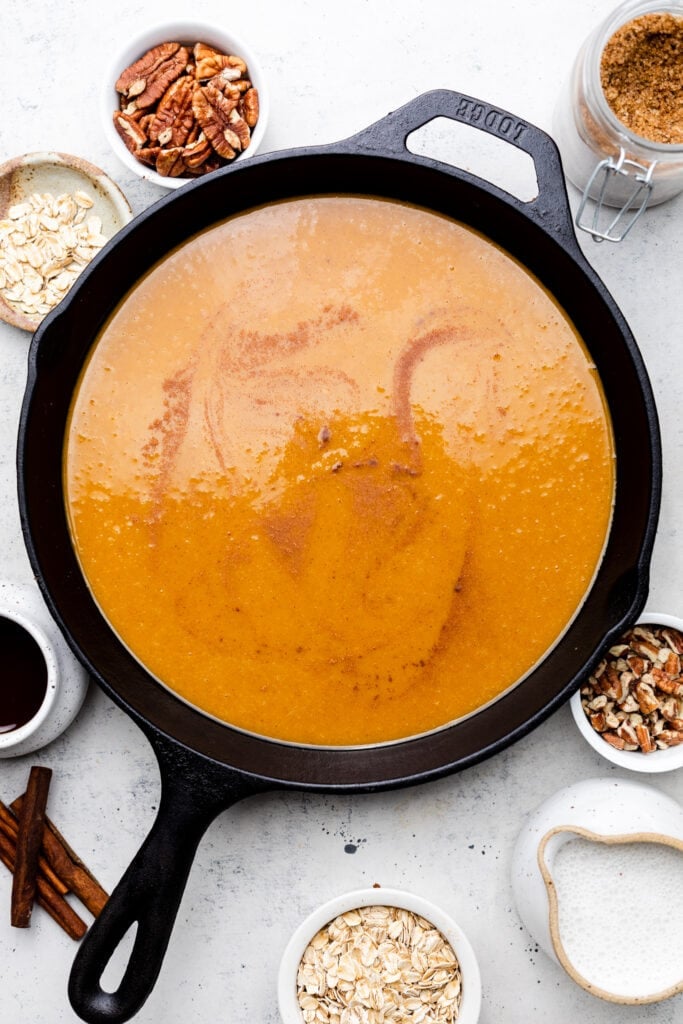 How to Make This Pumpkin Crisp Recipe

Step One: First, start by preheating your oven to 350 degrees and greasing a ten inch cast iron skillet with a bit of neutral oil.

Step Two: Next, add the pumpkin puree, maple syrup, eggs, almond milk, pumpkin pie spice, ground cinnamon, and salt to a mixing bowl. Whisk together until everything is well combined and you have a smooth filling. Pour the filling into the prepared skillet.

Step Three: Now, make the oatmeal crisp topping. Add the gluten free oats, almond flour, brown sugar, chopped pecans, ground cinnamon, salt, and butter to a mixing bowl. Use your hands to work the butter into the dry ingredients until you have a slightly clumpy crisp topping.

Step Four: Use your hands and sprinkle the crisp topping evenly over the pumpkin filling.

Step Five: Bake the pumpkin crisp at 350 degrees for around thirty minutes until the top is golden brown and the filling is just set.

Step Six: Once it’s baked, remove the crisp from the oven and let it cool for ten minutes before serving with ice cream and a sprinkle of cinnamon or pumpkin pie spice. Enjoy! 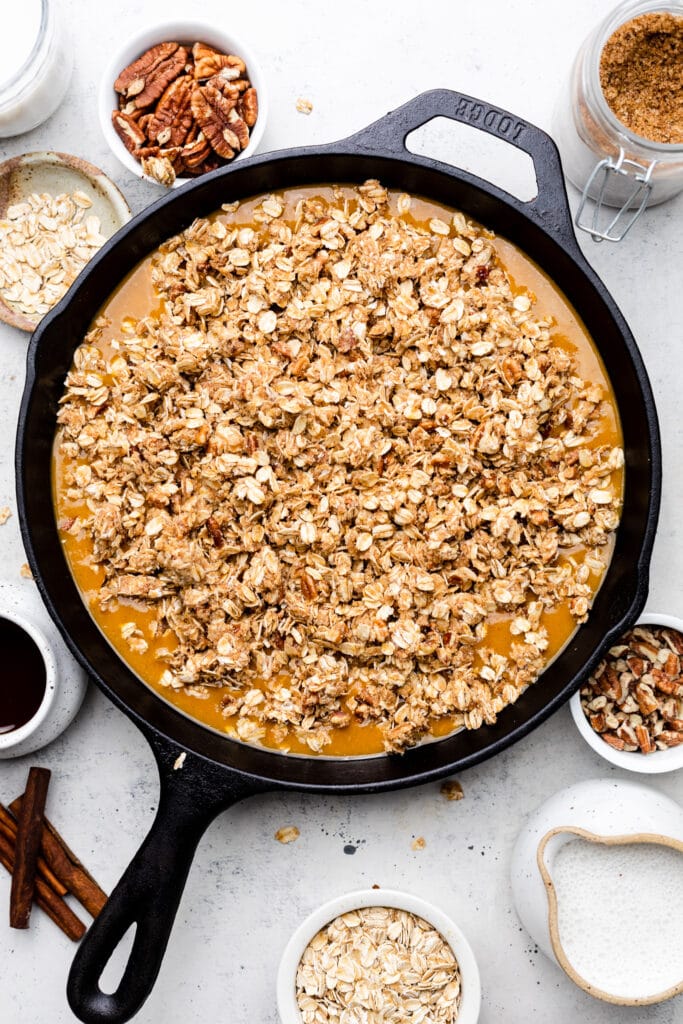 How to to Store Your Pumpkin Pie Crisp: Hot or Cold?

Store the pumpkin crisp, tightly covered, in the fridge for up to three days.

What’s the Difference Between a Crisp, Crumble, and Cobbler?

While crisp and crumbles are similar, there is a key difference. Crumbles also have a streusel topping, similar to a crisp, however crisps contain oats. Crumble toppings also tend to be a bit more dense and cake-like than crisps. Cobblers are topped with a thick, flaky, crust similar to a pie crust. 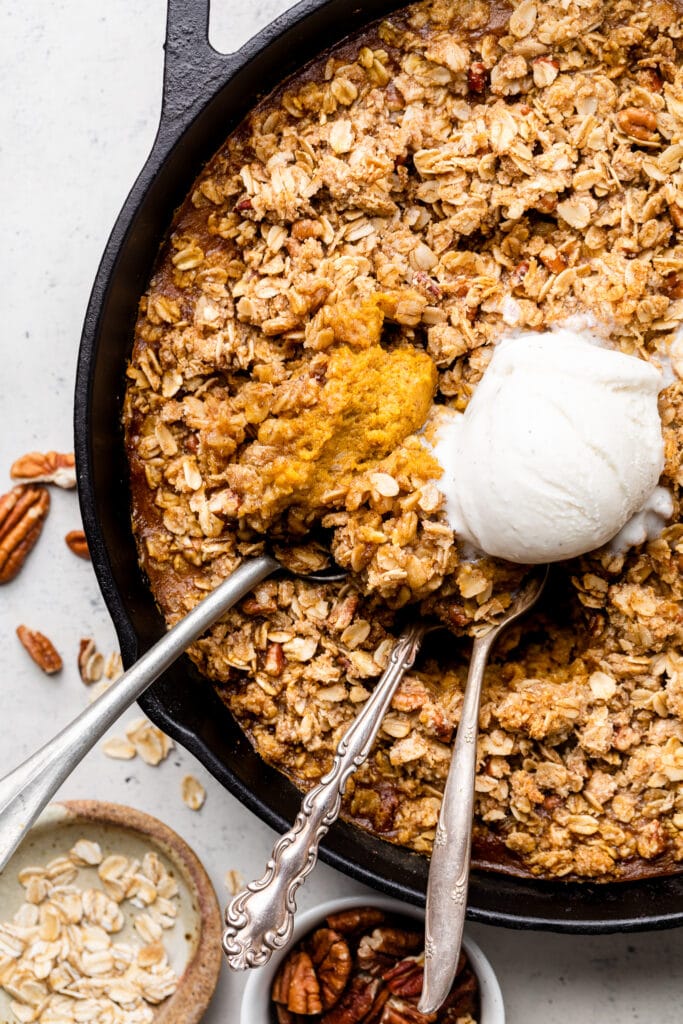 My preferred way of serving this pumpkin crisp is warm with a scoop fo vanilla ice cream. You can also serve it room temperature, or even cold, with a dollop of whipped cream on top!

Here are few more of our reader favorite Thanksgiving recipes to add your menu:

You can find all of our healthy and delicious Thanksgiving recipes to plan your menu, here! 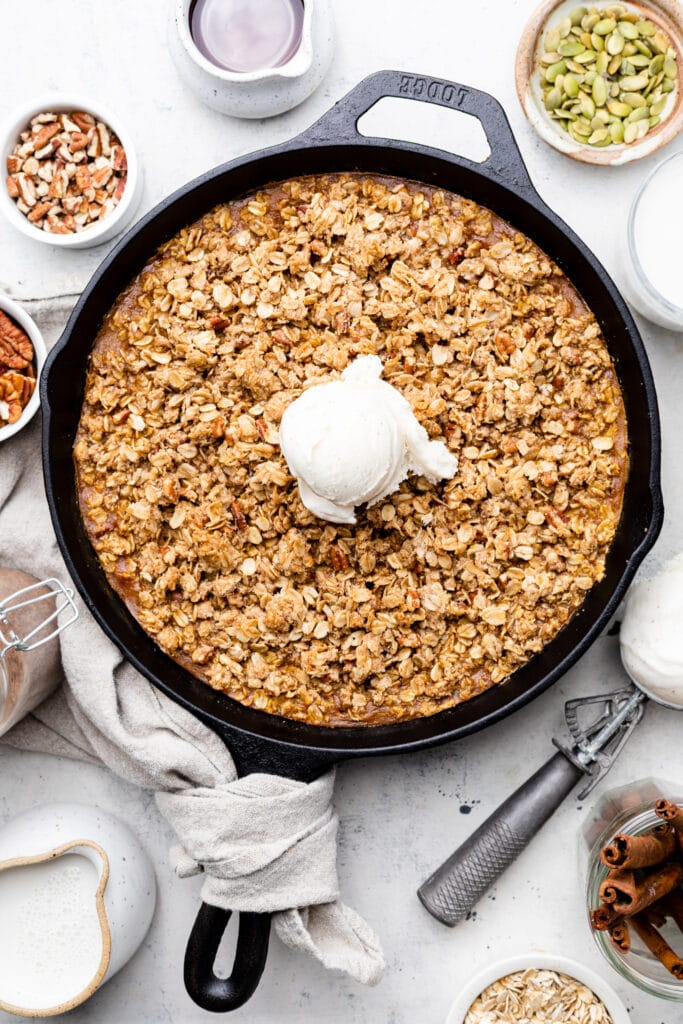 I hope you give this Oatmeal Pumpkin Crisp a try! It’s a delicious holiday dessert that is so easy to make.

If you do give this recipe a try, I want to know! Leave a comment with a star rating below. You can also snap a photo & tag @allthehealthythings on INSTAGRAM. Your reviews help support All the Healthy Things and make it possible for me to continue to create the recipes you know and love.

For the Crisp Topping

Recipe by: Ashlea Carver / All the Healthy Things | Photography by: THE MINDFUL HAPA

Thanks for stopping by All the Healthy Things. My name is Ashlea and I’m the founder and recipe developer behind ATHT. I’m so glad you’re here!